Earlier this year, my MGF sailed through its MOT check, apart from one thing – an enormously high CO2 emissions reading which meant an instant failure.

This is a not an unfamiliar experience for MGF and MGTF owners and very often the culprit is the Lambda sensor – an electronic unit located in the outlet manifold which monitors the emissions and then adjusts the fuel and air mixture going into the engine.

To check if this was the problem HAS linked my car into their diagnostics unit which monitors aspects such as the amount of CO2 and oxygen being produced from the exhaust – by revving the engine the oxygen reading should fluctuate, if it doesn’t then the Lambda sensor has probably stopped working and will need replacing. This was the case and HAS set to work replacing it. 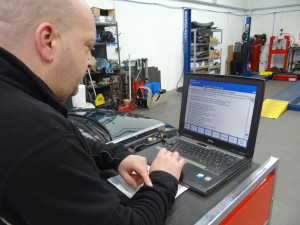 Accessing the sensor isn’t the easiest of tasks and involves removing the engine cover to reach and disconnect  the lead from the sensor which goes into the engine control system.

Next the vehicle needs to be raised to get at the exhaust manifold – but first you have to remove the heat shield which surrounds it.

Having exposed the Lambda where it is screwed into the four branch manifold you can attempt to undo it – but you will need a special angled spanner due of the restricted space and be carefully not to snap off the sensor or round-off the head.

Because the manifold is subject to some of the highest temperatures in the engine, more often than not HAS says it is impossible to remove the sensor with this method, even by applying heat – as was the case here.

If this happens the only alternative is to detach the manifold completely undoing the bolts holding it in place.

With the manifold removed it can be placed in a vice and the sensor unbolted. Once again time and heat variations can make this a tough job, so patience is required, along with some brute force. 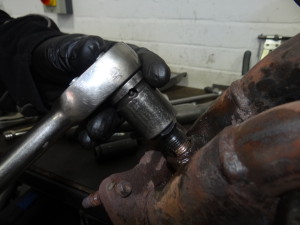 With the sensor removed this is an opportunity to clean out the thread in the manifold and perhaps even tap a new tread to ensure the replacement Lambda goes in cleanly. At the same time clean the bolts and threads that hold the manifold in place. 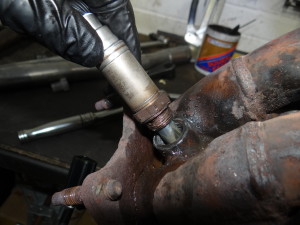 Before inserting the Lambda, check that the connector to the engine is the same as the one you have removed – there are several varying connectors depending on the engine model and age.

Finally, replace the manifold, the heat shield and re-connect the Lambda to the engine before relocating the engine cover and testing.

In my case the vital emissions reading fell dramatically from 3.0 per cent before replacement to 0.003 per cent after the new Lambda was installed.

As well as curing an MOT emissions failure, replacing the Lambda should also be undertaken if the head gasket is being changed.

Lambda sensors cost between £80 and £120 (plus VAT) depending on model and age of the vehicle as well as the unit manufacturer – most use Bosch or NTK units.

Replacing the Lambda normally takes about an hour, but if the manifold has to be removed and the senor is reluctant to budge the labour charge can be higher.