On the MGF one of the most vulnerable components to corrosion, due to its exposed location, is the lower wishbone plate on the front suspension – and this time HAS tackles the task of replacing this section. 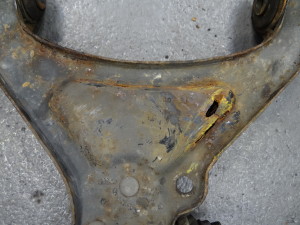 This is a complex and time-consuming process as much of the front suspension has to be released and it is best achieved with the car raised in the air to make access easier.

This allows you to undo the wishbone arm bolts behind the brake disc – there are two bolts one top and one bottom. 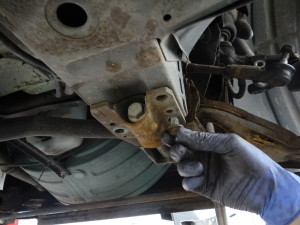 To gain access to the plate also requires dropping the front suspension frame which means releasing it on both sides of the vehicle, remembering to include the ‘U’ bolts on the steering rack as you do so.

Next release the front lower shock absorber link and undo the front suspension frame bolts on both sides.

You will need to jack-up the sub-frame to prevent it from dropping suddenly and you may need to remove the inner wheel arch lining to access the nuts on the sub-frame. 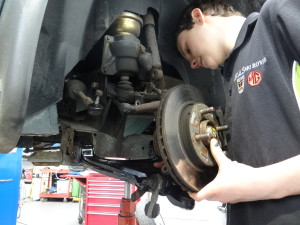 Next undo the anti-roll bar before gently lowering the sub-frame on the side you are working on – finally this gives access to the securing bolts for the wishbone plate and allows you to remove the plate and fit the new unit. 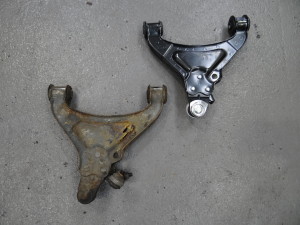 Replacing each wishbone plate takes around two hours and normally costs £205 plus VAT – but of course 1020 club members get a discount on this price at HAS. It is recommended to replace both plates at the same time as they are likely to have suffered similar amounts of corrosion and the labour costs will be significantly lower by doing two in one operation.